State of the Melbourne Property Market 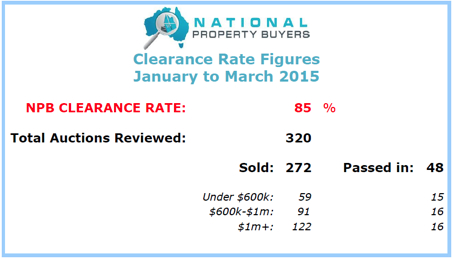 Interest rates were left the same at 2.25% following the Reserve Bank (RBA) meeting in April 2015. The RBA continues to assess our economic environment as growth is expected to remain quiet, given the weaker domestic demands and the weaker labour market. Lending for housing assets continues to grow with an increased amount of investors entering the market.

The auction market has received stronger demand from buyers in 2015 than in 2014. March 2015 was the strongest month so far this year with around 4,200 auction sales. There have been 7,500 auctions held in the year to date, with around 76% of properties being sold.

Similarly, the NPB Clearance Rate is 85% for the March quarter, compared to 83% for the same time last year, and 3% higher than the previous December quarter. The team at National Property Buyers have reviewed 320 properties during the first quarter, with 272 selling and 48 passing in. Interestingly, the higher end of the market (ie $1m+) has performed strongest with a NPB Clearance Rate of 88%. The $600k-$1m bracket had a clearance rate of 85%, while the lower end (ie <$600k) had a clearance rate of 80%. Vacancy rates in the Melbourne Metropolitan area have remained reasonably flat in March 2015 at 3%. The inner region experienced a reduction in the vacancy rate to 2.7%, while the middle and outer suburbs have remained relatively steady.