The clearance rate for this week was 55%, below the yearly average of 59% as reported by the REIV.  There were 419 scheduled auctions this week, of which 231 sold either before auction or under the hammer and 188 properties were passed in. While clearance rates in the 50-60% range were experienced in 2008 as a result of the GFC, clearance rates have not remained under 60% for this long since 2004. 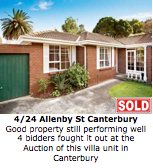 In Canterbury at 24 Allenby St, a renovated 2 bedroom villa unit on a block of only 4 was quoted at 520-570 by Noel Jones and attracted a crowd of around 50 people. The auctioneer Bruce Severns opened the bidding with a vendor bid of $500k to get the ball rolling and 4 bidders eventually participated. The property was announced on the market at $590k and continued until the hammer came down at a healthy $638k. 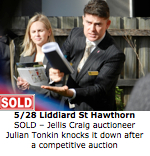 Jellis Craig auctioneer Julian Toinkin had no need to go inside and discuss the auction progress with the vendor as 4 bidders fought it out and the property was announced as on the market when the bidding reached $455k.

In Flemington, a crowd of 40 odd people kept their hands firmly in their pockets as auctioneer John Morello of Thomson Real in front Estate failed to extract a single bid at the auction of 37 Eltham St. The 3 bedroom Victorian terrace was quoted $800-880k and passed in on a vendor bid of $820k. The property remains for private sale for $880k.

At the higher end of the market, 21 Brenbeal St Balwyn attracted approximately 50 people but failed to gain any momentum. Hocking Stuart had quoted the property at $1.35-1.45m and the auction started with the auctioneer placing a vendor bid of $1.35m immediately after receiving a ridiculous opening offer of $1m.

Another auction in Balwyn for the prestige property at 97A Yarrabat Ave attracted a big crowd of over 120 people however failed to attract a single bid. The property, located in a beautiful tree lined street had been quoted at $2-2.2m and the big crowd watched and waited, however there were no takers. The property opened and passed in on vendor bids, and has a reserve of $2.35m. 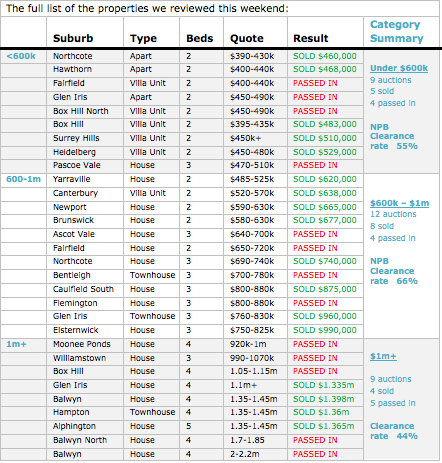 Overall, stock levels have reduced and that is not uncommon for this time of year. If you haven’t felt the cold weather yet, we are in the middle of winter and the school holidays.

The REIV has indicated there are approximately 1850 auctions scheduled over the next 4 weeks.

The high end of the market has been the category that is struggling most and it is important to get the right advice at this level as you could be paying a lot more than you need to at the moment. The right advice can save you ten of thousands of dollars.

If you need any help with searching, assessing or negotiating your next property purchase or simply wish to discuss your property buying needs with an expert, please don’t hesitate to contact me.