Another financial year has come and gone and the property market is settling in for the winter.

Although you wouldn’t know it.

Hot house markets in Melbourne and Sydney are still roaring along with buyers’ appetites for quality property seemingly insatiable. But it’s not just the big two that have a piece of the action. Markets across the country are generally moving onwards and upwards.

As we reach the crest of the year and start the run to Christmas (yes, it will be here faster than you think), we take a look at some of the highlights of the market at the halfway point of 2015.

The first half of the year has been characterised by an ever growing hunger in Melbourne and Sydney with demand showing barely a whisper of abating.

For example, suburbs in the inner east of Melbourne have been running red hot, with Armadale, Camberwell, and Balwyn recording 100% clearance rates (NPB data). Camberwell alone achieved 21 sales from 21 auctions, while Armadale has rocketed from a 62.50% clearance rate at the same time last year (NPB data).

Consumer confidence is so buoyed that in Brisbane, traditionally adverse to the auction process, the market is seeing almost historical clearance rates.

National Property Buyers Queensland State Manager, Stephen McGee said of the auction process in Brisbane that buyers are “jumping into the auction pool with encouragement from agents”. Interest rates set at an all-time lows coupled with returning confidence from the 2011 Brisbane floods, and confidence stemming from the strength of the market generally, the increased clearance rates are a “symptom of the market”. Over the last five weeks, clearance rates have averaged 54%, compared to 37% in June of last year.

Capital growth has also kept pushing higher. Core Logic RP released their Home Value Index results on Wednesday and the growth spurt has been even stronger in the second half of the year with a rise of 5.1% compared to 4.5% in the first half across the country.

No surprises that Sydney increased significantly, reaching 16.2% growth over the financial year. Melbourne is following at 10.2% growth with Adelaide (4.5%) and Brisbane (3.4%) rounding out the top four.

With the cash rate so cheap houses are also spending less and less time on the market. Properties in Sydney and Melbourne are now on the market for just 26 and 32 days respectively. Further north and Brisbane metro are seeing eight fewer days on the market and Toowoomba the fastest selling regional centre.

If you’re seeking some fast returns on rental yield then Brisbane apartments will serve you best, returning 5.4%. Compared to the rest of the market, apartments in Brisbane are streets ahead of the current yields of both houses (at 3.5%, the lowest since 2007) and units (at 4.4%, 0.1% off the all-time low of 4.3%, also in 2007). Stephen McGee recommends apartments on the periphery of the Brisbane CBD, between 2-5kms of the city centre are the best options to explore.

This figure could be even more impressive in the coming months. According to Tim Lawless of Core Logic, “capital gains will remain higher than rental growth which will push rental yields even lower.” 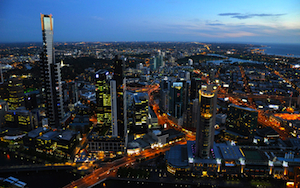 The bubble has been debated hotly over recent weeks, as we covered in our blog entry last week examining the Sydney market, but a burst only seems possible, rather than probable without a significant trigger point. National Property Buyers Victorian State Manager, Antony Bucello says “demand for good, well located property is outstripping supply and we can’t see this changing in the short term”.

The sentiment is echoed by Tim Lawless “in the absence of a trigger event, such as a sharp rise in the jobless rate, higher interest rates or an external shock, it is unlikely we will experience a significant correction in dwelling values.”

It seems there are still a lot of positives to look forward to as one financial year ends and another begins.