One of the key aspects of the negative gearing debate is whether or not removing the policy would affect rents.

Some in the property industry believe that removing negative gearing will drive up rental amounts. The theory is that landlords will raise rents to cover their losses from having their incomes taxed. Rents could also go up as the removal of negative gearing removes incentive for investors to keep their money in the property market, meaning less rental supply.

Another argument often put forward is that when the Hawke Labor government scrapped negative gearing between 1985 and 1987, rents increased.

These arguments don’t necessarily stack up.

Firstly, the reference to rents rising following the Hawke government’s decision to remove negative gearing is incorrect. For the majority of the country, rents did not rise during that period. Rents did rise in Sydney and Perth, but this was not due to the removal of negative gearing.

In April and May of last year, then Treasurer Joe Hockey cited the Hawke government’s decision as the catalyst for rental increases. ABC News ‘Fact Check’ interrogated the claims and found that they were incorrect. Rents in other capitals either remained stable or dipped slightly during that period.

According to an article from the Grattan Institute published in The Conversation, the reason for the increase in rents in Sydney and Perth was due to “population growth and insufficient residential construction – due to high borrowing rates and competition from the stock market for funds – not the policy change.” 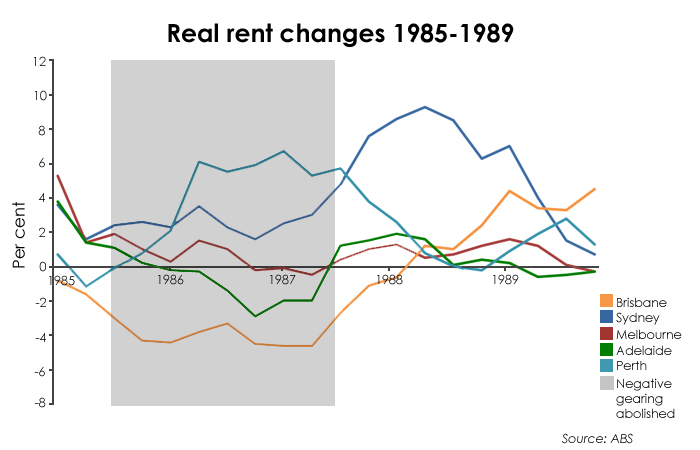 Secondly, tenants can always move if their landlord was to substantially raise rents. There are a lot of positively geared properties in the market, as well as any newly constructed properties that would qualify for negative gearing under Labor’s proposed changes providing tenants with plenty of options.

Supply and demand governs the rental markets, just as any other. If investors leave the market, their properties are either bought by other investors, or they are bought by owner occupiers, meaning a renter and rental property is taken from the market. In both scenarios the supply and demand balance is ultimately unchanged.

Of course, there may be some instances of rents increasing due to the removal of negative gearing, but these would be in the minority. There are a number of other factors that have a greater impact on rental amounts other than negative gearing, and it is therefore very unlikely removal of the policy would raise rents.