We’ve been used to seeing weekly clearance rates languish in the 50 percentile throughout the latter half of 2011; therefore this weeks 61 per cent clearance rate is something to take note of.

According to NAB’s Quarterly Australian Residential Property Survey, market sentiment is improving. Consumer confidence was the primary reason for last year’s downturn; therefore an uplift in sentiment is a significant change. A full breakdown of their results can be found here.

There are a few interesting aspects to the current market. Whilst a higher clearance rate is a positive indication of increased market activity, there’s still a fair distance between the number of properties selling ‘under the hammer’ and those being negotiated after a pass in.

One of the bugbears of the industry resides around the lack of transparency that distinguishes the difference. Agents aren’t required to disclose which sell under the hammer and which are negotiated after passing in – all results are reported as ‘Sold at Auction’.

However, noting the distinction is an important piece of information we need to accurately ascertain market sentiment. If an increased number of properties are selling under the hammer, there’s every indication we’ve moved into an upward trajectory of the property cycle that will eventually translate into higher property prices.

However, if the numbers selling are generally ‘via negotiation’, it signifies there are still good options available for those ‘astute’ in price assessment and negotiation. It’s certainly advantageous for those using a ‘buyer advocate‘ to negotiate on their behalf.

The other important indicator that we’ve not entered an upward trajectory ‘just yet’, are the numbers selling prior to auction. Agents will generally only negotiate ‘prior’ to the date if they’re confident there’s not enough competition to achieve the sale price ‘desired’ by the vendor ‘under the hammer’. It’s also interesting to note that the number of properties sold prior has not diminished on the back of the changes to the ‘cooling off’ rules.

It’s now impossible to wave cooling off rights three business days out from an auction – (which has – until now – been a usual requirement by sales agents when negotiating pre auction sales). In other words, if an agent gets an offer prior to auction that’s accepted by the vendor, there’s a three business day wait before they can confidently announce the property as ‘SOLD’. It complicates the process for many reasons – however at this point in time, agents are keen to wrap up deals quickly.

Again, those experienced in the art of property negotiation will benefit in this market.

Finally, do a property search through the Internet and you’ll see a dearth of quality listings available on the ‘open’ market and an abundance of poorly located (or undesirable) properties ‘hanging around.’ We buy a large percentage of properties ‘off market’, however in a ‘boom’ market, all properties tend to sell and ‘time on the market’ is reduced. We haven’t reached this stage yet and only the quality listings are attracting this ‘increased’ activity represented in the 61 per cent clearance rate.

So the conclusion we can draw from the above is a higher degree of activity in the market place will eventually translate to a lift in the median house price along with reduced opportunity to negotiate. However for the time being, the market is still proving favourable for buyers. 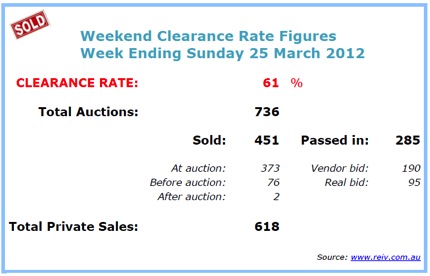 The NPB Clearance Rate for the week was 74% – which falling in line with the REIV results, is slightly higher than last week’s clearance rate. We reviewed a total of 42 properties of which 31 properties sold and 11 passed in.

The NPB clearance rate is reflective of the uplift in sentiment mirrored in the REIV’s clearance results. Although it’s too early to draw too many conclusions, an indication of increased activity has been perceptible at all open for inspections and auctions we’ve attended.

Demand in the sub $1m price bracket is still stronger. However in comparison to late last year, the $1m plus market is also showing signs of a potential uplift. The full list of the 42 properties reviewed by NPB this weekend: 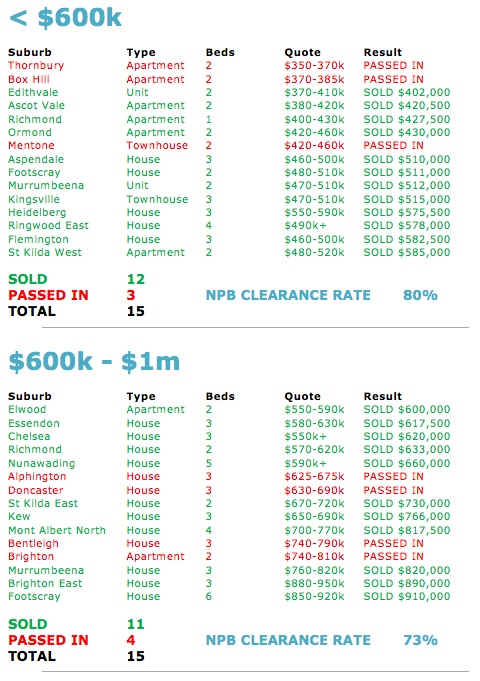 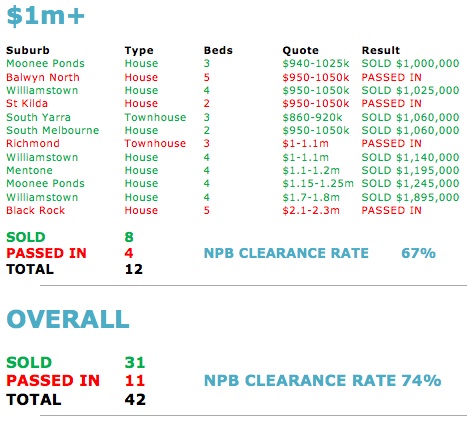 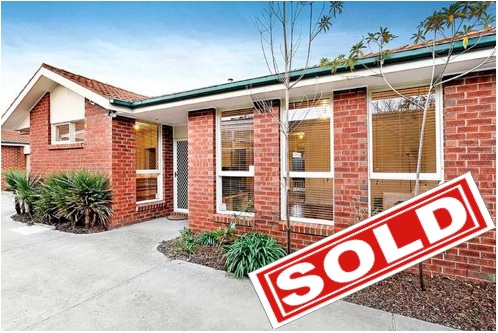 Comment: The auction opened on a vendor bid of $470K. Two bidders competed and the price reached $502k fairly quickly. After a short discussion with the vendor, the auctioneer returned to announce the property ‘on the market’. The same two bidders continued to fight it out until the property sold under the hammer for $512k. 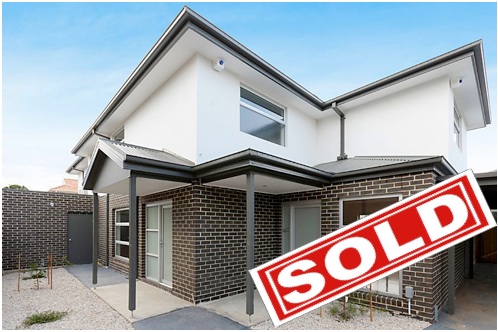 Comment: A crowd of around 30 attended the auction. Opening on a genuine bid of $470K, 2 bidders competed and the action was strong. By 512K the bidding had broken down to 1K increments, however it failed to advance past this number and passed in. The home was successfully negotiated post auction for $515K. 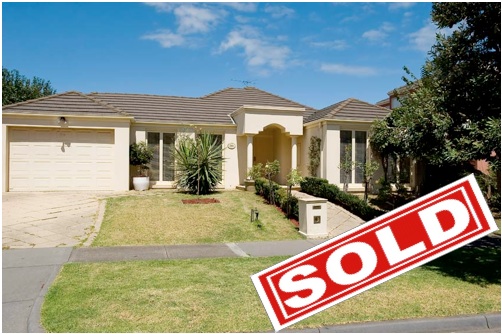 Comment: The auction opened on a vendor bid of $1Mil. However following a genuine bid of $1.025Mil, no other interest was forthcoming. The home passed in and was later negotiated for an undisclosed price in excess of the quoted range.