A total of 803 properties went under the hammer on the weekend and 439 of those found new owners and 364 passed in, 230 of which passed in on a vendor bid.

Of the 439 properties that sold, nearly 20% of those sold before auction, indicating vendors (and their agents) are willing to look at and accept offers providing they are reasonable. That is not unusual for this time of year and in this type of market, as vendors tend to get a bit nervous that their properties will not sell and remain on the market during January, a time when buyer activity is considerably lower than at other times of the year.

There is only one auction weekend left for 2011 and the REIV is expecting over 600 auctions. The REIV clearance rate for the entire year is almost certainly to come in at 56%.

With the Reserve Bank of Australia cutting the cash interest rate a further 25 basis points last week, and the major banks confirming that they will be passing on the entire amount, buyer confidence is expected to pick up in 2012. While we don’t expect to see a major change in the early part of 2012, we anticipate market conditions will improve once the festive season is out of the way.

The Melbourne property market is still in favour of the purchaser and if you are looking at buying property in 2012, now would be a good time to start the process as the window of opportunity for a good deal will become smaller and smaller. 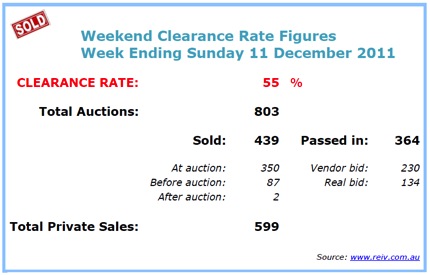 A total of 48 properties were reviewed and monitored over the weekend and 34 of those properties sold and 14 passed in.

The lower end of the market continued its strong end to the year with a category clearance rate of 77%, up 6% from last weeks’ 71%. Fourteen of the 18 properties we reviewed sold and only 4 passed in.

The high end of the market performed surprisingly well over the weekend, with 9 of the 13 properties we monitored selling and 4 passing in, representing a clearance rate of 69%, up 9% on last weeks’ 60%.

The middle range category performed the worst but was still fairly balanced with a clearance rate of 64%, which is the same as it was last week. We reviewed 17 properties and 11 of those sold and 6 passed in.

Not much is expected to change for the final auction weekend of the year. Next week will be the final Melbourne Property Market Weekly Update for 2011 and weekly updates will recommence in February.

We will be publishing the 2011 NPB Report which will include the overall performance of the Melbourne Property Market from an REIV and an NPB point of view in the January edition of our Buyer Insights newsletter. 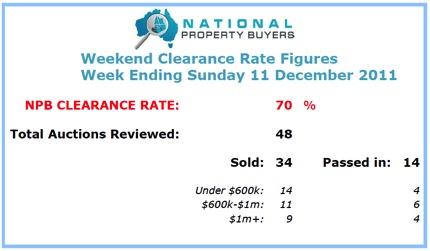 The full list of the 48 properties we reviewed last weekend: 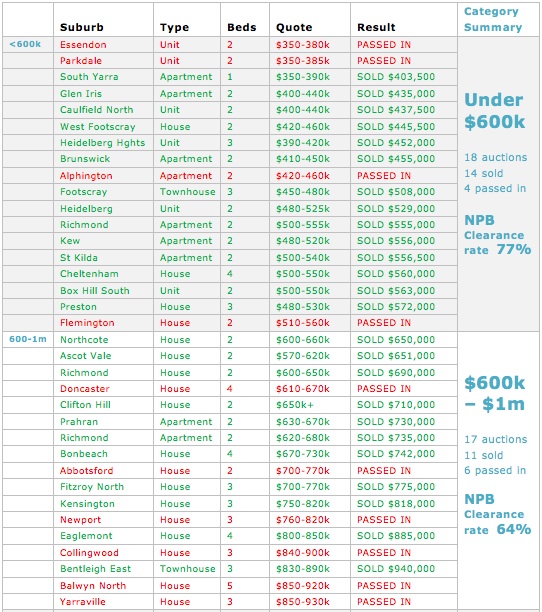 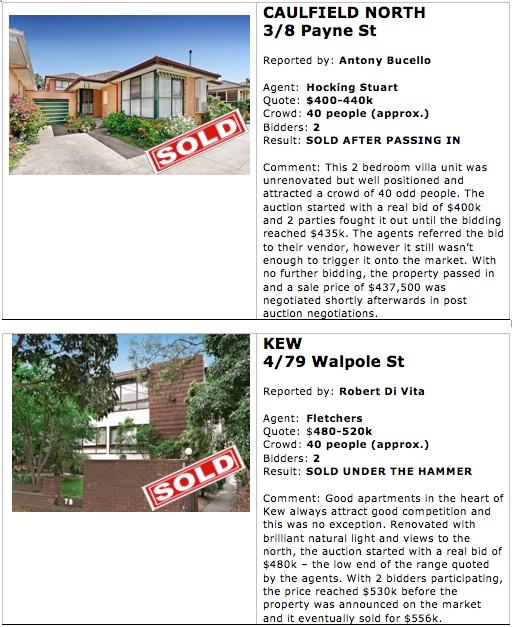