New data from Core Logic RP Data released at the beginning of the month is starting to indicate potential market trends emerging, and it’s not necessarily the usual suspects that are making the bigger movements.

Melbourne has continued strong growth over the last quarter and has moved ahead to widen the gap between Sydney. Growth in the New South Wales capital has moderated over YoY to 9.5%, down almost 9% from the YoY peak recorded in July 2015 of 18.4%, while Melbourne has continued to progress and has reached 11.1% YoY.

However, it’s growth over the quarter and past month that has thrown up some interesting results that point to how the market could be looking over the coming year.

Surprisingly, Hobart grew significantly higher than any other capital city over the quarter, reaching 8.5%. Melbourne was second at 3.8%, followed by Brisbane on 2%. Hobart also grew by 2.9% over the month of February, followed by Adelaide (1.9%) and Brisbane (1.8%). In comparison, Melbourne and Sydney have grown by 0.3% and 0.5% respectively. 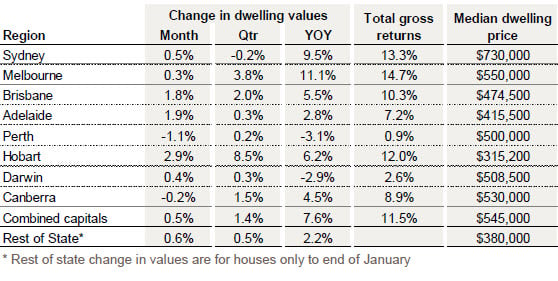 The reason for the increase in growth in the smaller markets could be due to buyers looking for other investment opportunities who have been priced out of the larger markets. That Adelaide, Brisbane, and Hobart have increased significantly more than Melbourne and Sydney over the last month would indicate that buyers are continuing to purchase in other markets as the year commences, carrying on the trend from last year.

“Affordability constraints aren’t as apparent in these cities and rental yields haven’t been compressed to the same extent as what they have in Melbourne or Sydney” according to Tim Lawless, CoreLogic RP Data head of data.

February saw the markets kick off for the year and these figures are early indicators as to how the market may move in 2016. Trends will begin to consolidate as the quarter comes to an end this month and it will be interesting to see if they continue. Of course, trends can change, but the market may see a notable change in buyers’ preference this year following the extraordinary growth in Sydney and Melbourne in 2015.

Reading and understanding market trends is crucial to securing the right investment property, and a property expert should always be consulted before a purchase is made.