Those who are thinking of buying in 2016 should take up the opportunity. The results of the first quarter for 2016 are in and buyers will find a more balanced market compared to last year, affording good buying conditions.

The March 2016 Hedonic Home Value Index released by CoreLogic RP Data shows some slowing in the larger property markets of Melbourne and Sydney YoY, while other markets such as Brisbane, Adelaide, and Hobart are making healthy increases.

Sydney has dipped the most of any state capital city (excluding Canberra) since the beginning of the year, recording a drop in annual growth from 10.5% annual growth to 7.4% YoY at the end of the quarter. 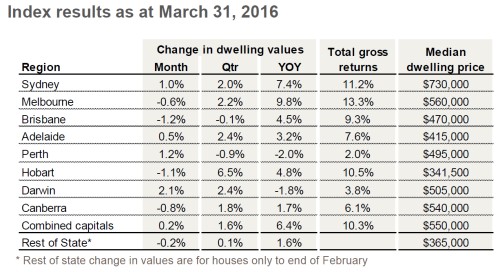 Melbourne has proven to be a far more stable of the two largest markets, reaching 9.8% growth at the end of the quarter.

“Demand exceeding supply only increases property prices, however it is not unusual for growth levels to ease in the second quarter as more stock is expected, which will cater for the demand to a certain extent” he said. “Long term capital growth prospects in Melbourne are still looking very good.”

The biggest movers for YoY growth in the first quarter have been in Adelaide, Brisbane, and surprisingly, Hobart.

There’s plenty of auction activity for quality property in Adelaide, according to NPB South Australian State Manager, Adam Stone. “Good property stock is selling quickly, and Vendors are choosing to not sell before auction” he said. “Properties are realizing some good prices under the hammer.”

Inner city apartments are proving to be the most challenging markets for investors. In Melbourne, the oversupply of high density apartments in and around the CBD are not only proving difficult to make gains in capital growth, but also not to lose money.

According to the CoreLogic December 2015 Pain and Gain Report, “19.5% of all Melbourne council area units were resold at a gross loss” over the last three months in 2015.

The market will begin to hit its stride in the next three months and with more data will come more identifiable trends. What looks likely is the heights reached of 2015 have abated and the buyers will have the opportunity for a more even market, while still enjoying good capital growth on their purchase. Essentially, if these trends continue, 2016 will be an excellent year for purchases.