Suburb profile: Greensborough – why it’s attracting the attention of buyers

Located 18kms north-east of the Melbourne CBD, Greensborough is beginning to attract significant interest from buyers thanks to good value property and access to amenity.

There’s lots to like about Greensborough and its surrounding areas thanks to the established infrastructure in the area. There’s plenty of transport options with arterial roads such as Greensborough Road and the Metropolitan Ring Road providing access into the city and to the airport, as well as buses and rail transport on the Hurstbridge line. There’s also abundant parkland, choice of schools, RMIT and La Trobe University, and the redeveloped Greensborough Plaza offering everything buyers look for. 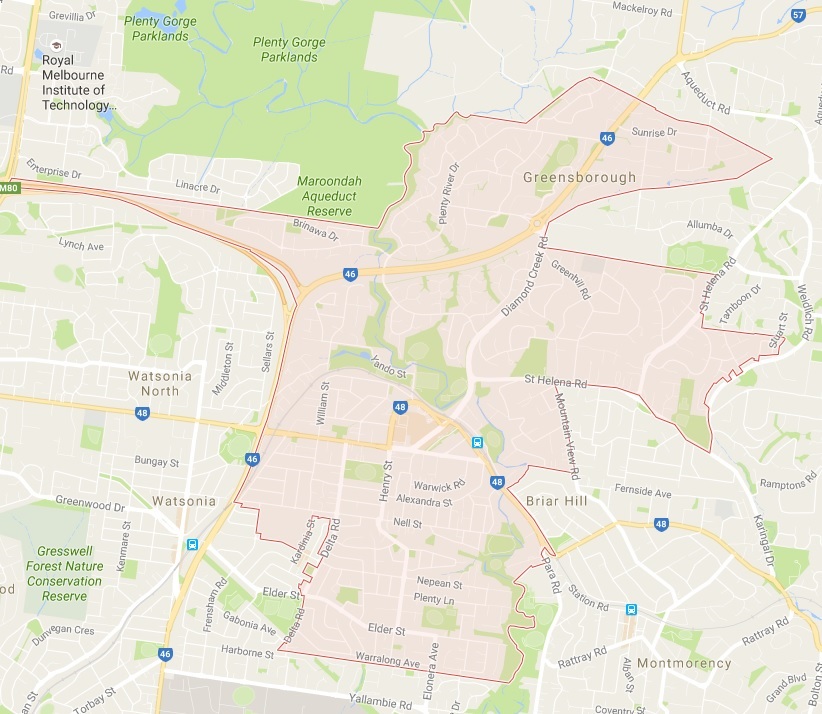 Greensborough is located 18kms northeast of the Melbourne CBD

However the key to Greensborough’s growing appeal among buyers is the excellent value of the property.

“It’s probably one of the most affordable suburbs in that middle ring, which still provides good access to the CBD and airport” said Senior Property Consultant, Brenton Potter.

“If you were to go out east or into the southeast/bayside area by the same distance, you’d be paying close to $1million. Going out west and there isn’t the same access to the CBD. We’ve recognized the value to the buyer and have been monitoring it as a suburb to watch.”

“For example, we recently purchased a three bedroom family home in a great location minutes to Greensborough Plaza, parks, and Greensborough station for just over $600,000. Even 10 minutes down the road in Rosanna and that house would be substantially more.” This rising interest could be due in part to the type of stock available. 90% of the property in the suburb is free standing home, giving families or first home buyers looking for a house with a land component good opportunities.

There’s also strong potential to renovate due to the established nature of the stock.

“It’s a good area to look at if you’re starting out or wanting something to renovate” said NPB Vendor Advocate, Lisa Stafford.

“We acted as a Vendor Advocate to assist in the sale of a two bedroom property which had plenty of potential and was perfect for first home buyers to make their own.

The property attract good interest that translated into strong competition on auction day which achieved a great result; it was a really strong indication of the interest that is being generated in the suburb” Lisa said.

“For buyers looking at the moment, we would recommend the area around the Greensborough Plaza” says Brenton Potter.

“Between Diamond Creek Road to the east and Greensborough Road to the west is a very appealing area from our point of view. It’s close to rail transport, parks, and a few cafes as well.

Those kind of indicators tick a lot of boxes for us as well as buyers and we anticipate that interest to grow as a result.”