Stamp Duty: What is it and Why do we pay it?

Is Stamp Duty a necessary evil and just a fact of life or is it a revenue raising enterprise for the various state governments? A recent Mortgageport poll found that 100% of people questioned believe Stamp Duty should be abolished, now that is a convincing response!

Stamp Duty was introduced in the 1600’s, possibly by either the Spanish or the Dutch as a form of revenue raising and was gradually introduced throughout the world. The colonial treasurer at the time of its introduction into Australia noted:

“It is a magnificent mode of extracting money from the subject”

We really didn’t have much hope in avoiding taxes did we?

An important point to note, the Federal Government of Australia does not charge Stamp Duty, it is levied by the individual states and Stamp Duty rates vary from state to state. Stamp Duty is charged when a property is sold/purchased and it is the buyer in any transaction who will be liable for any Stamp Duty charge that may be applicable. In Ken Henry’s review on tax reform from 2010, he stated that Stamp Duty was an inefficient tax and recommended that Stamp Duty be abolished on property. He recommended replacing Stamp Duty with a broad based land tax that would be levied on all properties. From another perspective, Stamp Duty is seen as a disincentive to investment in property and also a restriction on first home buyers trying to enter the market or those wishing to upgrade to a family home. It discourages housing turnover by unnecessarily penalising people that move to homes that better suit their individual needs. 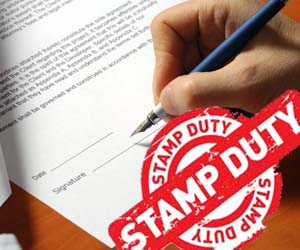 The reason the tax can be labelled “inefficient” is that it leads to an inefficient use of housing stock, discouraging couples with large homes from downsizing, leaving empty rooms or from workers relocating to suit their employment.

For a comprehensive take on the charges, visit your individual state’s SRO or equivalent web page such as Victoria’s:

Interestingly enough, Stamp Duty has been waived for first home buyers in Western Australia, NSW, Queensland and the Northern Territory.

State governments are heavily reliant on Stamp Duty as a revenue stream so are reluctant to make any changes at this stage without realising a benefit in another area to make up for the income loss. The Australian Bureau of Statistics (www.abs.gov.au) showed that across state and territory governments for the financial year 2012-2013 there was almost $36 billion in taxation revenue from property alone. $36 billion! Of that, Stamp Duty was $12.8 billion. The RBA also notes that just over 4% of all housing stock is transacted annually, therefore 4% of the population are paying taxes that support projects that benefit the entire community.

Also something to consider is that Stamp Duty rates have not really changed since 1986 while property prices have risen by more than 14 times since the 1970’s. The more fairer way to charge Stamp Duty may be on a proportional basis rather than an old calculated scheme.

The ACT is the first of the states/territories to tackle the issue and have introduced a sensible plan to transition out Stamp Duty over the next 20 years, replacing it with a broad based land tax levied via an increase in property rates.

There is certainly some work to be done to create a more and equitable system for all but it is not the only tax reform task the various governments of Australia have on their plates moving forward!