Buyers have received another reminder to be wary of high density apartment purchases in certain markets, with the Australian Financial Review reporting on the 140 suburbs that have been included on AMP’s ‘black list’.

Oversupply in certain areas and off the plan sales are of particular concern to lenders, affecting buyers of new developments as well as vendors hoping to sell in those areas. In some cases, properties in these over supplied areas experience little to no growth in value, and can even lose value.

Other lenders keep similar databases of high risk suburbs; last year, NAB released a list of suburbs that were determined as higher credit risk, and for which buyers would have to pay a larger deposit to buy in those areas.

One of the most oversupplied apartment markets is inner city Melbourne, where construction has grown so much that the city will have 21,881 more residences than is required by 2017, according to a BIS Shrapnel Report.

In Melbourne, the CBD, Docklands, and South Melbourne are seen as high risk. Halifax and Sturt streets in the Adelaide city centre are too risky, while the Brisbane CBD, City East, and Wintergarden are on the list, among others. 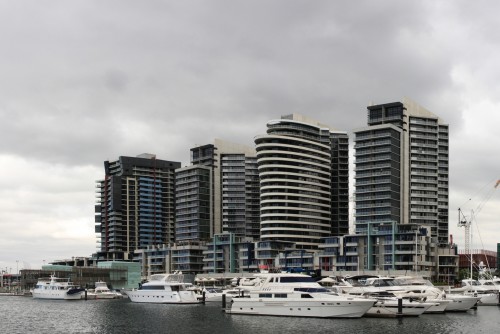 Investors are having a far more difficult time securing cash flow as a result of the oversupply, with tenants having abundant choice of brand new apartments giving them the freedom to pick and choose. In turn, landlords have to rethink their strategies to attract tenants.

The AMP list should remind buyers of the need to conduct thorough due diligence before purchasing a property. New developments in over stocked areas will almost always struggle to grow in value, and buyers should also be wary of the ability to sell property on after purchase.

To get expert advice, seek the guidance of an independent consultant.