The property market in Brisbane continues to gain momentum again after a sluggish start to 2015 and some great opportunities are being had by smart buyers.

Well located properties are still receiving multiple offers from buyers within a day of being listed for sale.

It is not uncommon now for agents to have 2 – 3 Open Homes at properties that they know will be in demand just to get all of the potential buyers through the property.

Outer ring suburbs on the south side are my picks for significant capital growth over the next 12 months so look in areas such as Moorooka/Yeerongpilly/Mt Gravatt & Mt Gravatt East. We have also noticed some upwards movement in values in the bayside’s Wynnum & Manly areas.

These areas in particular are earmarked for commencement of a number of boutique style residential developments over the next 12 months.

Join us on the NPB Brisbane Bus Tour! You can’t keep ignoring this opportunity to get on the property ladder!

The time to buy and reap future capital growth is NOW!

Spend time with a Property Expert by joining us on the Brisbane Property Market Bus Tour for home buyers and investors.

Up – Up & Away….Skytower: Construction of Brisbane’s tallest tower set to begin

It is set to tower over Brisbane’s CBD, but only a third of the investors who have bought a slice of the Skytower are actually from the Sunshine State.

Construction is only weeks away from beginning on the city’s tallest skyscraper, a 274-metre high tower at 222 Margaret Street that will house 1119 apartments. 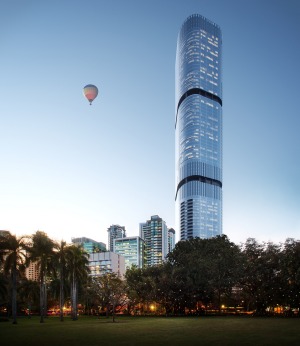 AMP fund manager Warwick Petschack said about 550 apartments had been sold. He said roughly a third of investors were from Brisbane, 20 per cent from overseas and the rest from interstate.

“We’ve got a good buyer mix from all of the cities in Australia, but huge support from the Brisbane market as well,” he said.

Eight levels of underground carparks have been completed, and the builders will now begin laying the foundations before the tower takes shape and the first residents move in by 2017.

Skytower will be the city’s tallest building until another development at 300 George Street reaches the 274 metre mark, which is the maximum height permitted in Brisbane because of aviation regulations.

The two sites will be Australia’s equal third tallest skyscrapers behind the Gold Coast’s Q1 and Melbourne’s Eureka Tower.

Mr Petschack said Skytower would be an “iconic” building for the city, but played down its architectural significance when a television journalist asked if it would be Brisbane’s answer to the Sydney Opera House.

“It will become an iconic building because of its scale, but others will add to the Brisbane story,” he said.

Mr Petschack said the developers had abandoned plans to try to increase the height of Skytower to 300 metres.

The Skytower project features mostly one and two-bedroom apartments, with prices starting from $425,000. The second stage of apartment sales is set to begin this weekend.

Another development next to Skytower at 111 Mary Street is expected to be a luxury hotel. The site was owned by Billbergia and AMP Capital before it was sold last September.

Hutchinson Builders chairman Scott Hutchinson said “thousands” of new jobs would be created during the construction phase, and he hoped his company would win the contract to also build the proposed hotel next door.

The purchase of a property will in most cases be the most expensive transaction you will be involved in. So it makes sense to make sure that you apply some rules and common sense to the process. Most investors buy properties close to home, their comfort areas.

However, you should still apply a minimum amount of due diligence to your process, in your own back yard or not.

Here are my top tips to help you along the way.

I would suggest looking in areas that your price range is suited for. Subscribe to a resource provider and get to know your areas well and what the drivers are for growth.
Make sure you get friendly with local agents and they can keep you informed of activity within those areas. All suburbs have cycles and micro cycles. Get to know them.

Get to know the property types and sales data, time on market and discounting from listing price to sales price. This will all become invaluable information for you.

Inspect as many open houses as you can and monitor sales of them. As you record the data you will get to know trends and pricing in that area and you will then be familiar with any opportunity that you see and have the ability to make a decision fast.

4. Give up your weekends

Attend as many auctions as you can as this will give you an insight into buyer’s prices in the area about 2 weeks before it is common knowledge. Again arming you with that all important information for when you find that opportunity.

The way that you approach an agent and seller can sometimes determine the level of discount you are able to get. It’s not where you start, it is where you finish that counts and different strategies can translate into good cash savings on a property. Spend time with investor meetings and get to know their methods and tricks.

6. Set your price and stick to it!

This is as important as buying in the right area.

Even if you bought an average property in a good area you can at least make some changes to it to catapult its performance. But it is important to make sure you get the property at a good price otherwise you will be spending the first couple of years playing catch up.

Make sure you know your areas and your prices. Armed with this knowledge you can do your own CMA on any property that you like and will have an accurate value in 5 minutes.

Queensland’s population growth has slowed to its lowest rate in 15 years, according to figures released by the Australian Bureau of Statistics (ABS) today.

“The sunshine state’s growth rate was 1.5 per cent in the year to September 2014.” said Phil Browning from the ABS. “While this is similar to the national growth rate, it is well below the state’s 15-year average annual rate of 2.1 per cent,”

“This slower growth is due to a nine year low in the state’s net overseas migration and one of the lowest net interstate migration increases in over 30 years.”