How do the top AFL 8 teams rank when it comes to house prices?

It’s that time of year again when Australia gets swept up in finals football madness. What would happen to the AFL leader board if your team’s position was determined by property performance in its suburb? Would top become bottom, would it stay the same? Does the growth of a suburb reflect the improvement of a team? Let’s find out.

Standing tall at the top of the table would be Greater Western Sydney, it’s suburb Homebush has the highest median house price at $2.32M and has experienced solid growth over the past 12 months (14.74%), like it’s young side who are about to have a crack at winning their first grand final.

Coming in a close second at $2.3M is the ever consistent Sydney (Paddington) which has shown consistent growth (7.36%) and although the team got off to a slow start to the year, they are timing their run to perfection. 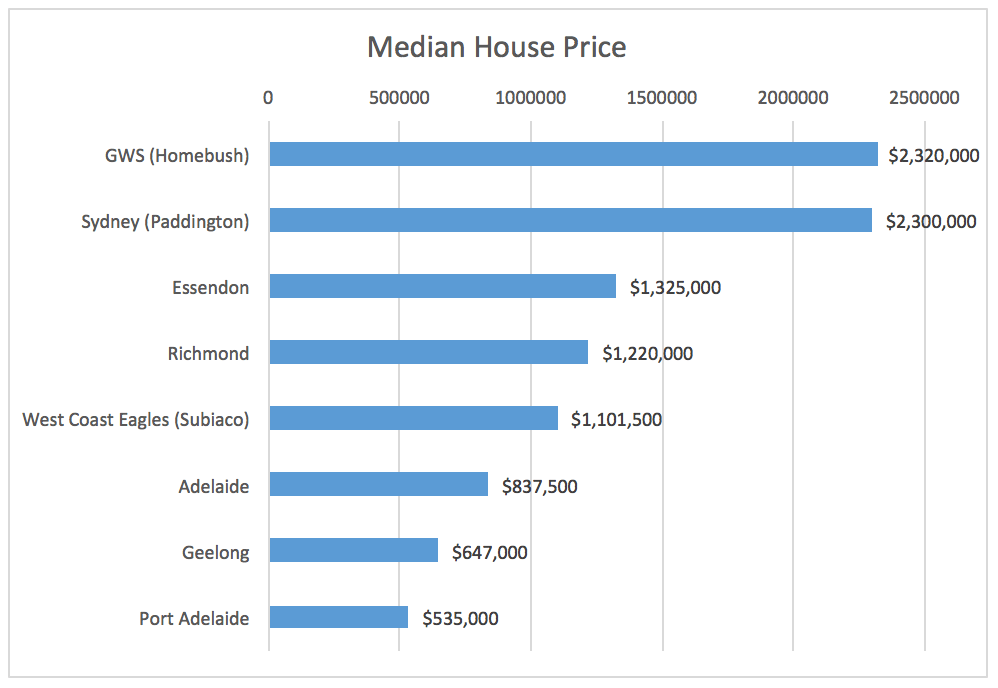 The mighty Bombers come in at third position at $1.325M and interestingly the team that possibly had the most to prove, their suburb has experienced the most growth with a whopping 22.83% increase in the past 12 months. This team’s journey from the wooden spoon last season to the top half of the ladder is an amazing turn-around so let’s see if they can continue and play consistent finals footy. Richmond sit in fourth position with a median house price of $1.22M and although its average growth over the past 12 months is 6.77% they have shown much more improvement on the field and have given the Tiger Army much to cheer about. It will be great to see the Tigers play some exciting footy over the finals and it’s up to them to see how deep they go into September.

Sliding to fifth position is the West Coast Eagles whose median house price in Subiaco has dropped over the past 12 months by 10.88% to $1.101M. The slump in house prices is not ideal for the western suburb but the team has many hardened veterans to put up a good fight during their finals campaign.

Adelaide who sit on top of the AFL ladder come in at sixth with a median house price of $837k and have shown double digit house price growth over the past 12 months of 10.94%. The price increase has been backed up by a strong display on field with a powerful forward set-up which will be hard to beat on the big stage.

Down at seventh is another regular finals contender, Geelong. The median house price is $647k with a consistent price growth of 6.77% over the past 12 months. Similarly, their on-field performance is dominated by a well drilled side that has every chance of knocking off any side in the finals.

Rounding us out at number eight is Port Adelaide with a median house price of $535k and due to insufficient sales data for the past 12 months no trend in growth can be calculated. Is it possible that once you buy in Port Adelaide you never leave? Considering Port Adelaide hosts the oldest professional sporting club in South Australia it seems so. No doubt their loyal fans will make the trek across the border to support their beloved team.

Interestingly, the suburbs with some of the lowest median house prices occupy the two highest positions on the leader board. As expected, the highest median property prices are dominated by Sydney, followed by Melbourne and lastly Adelaide. Does property value and suburb wealth have any bearings on the final standings of teams? Apparently no, if the property underdog Adelaide wins.